Ukraine has been among the countries with the largest software piracy level. According to the research conducted by the International Association “Business Software Alliance” (it consists of Microsoft, Adobe, Autodesk, Corel, etc.) 82% of all software used in Ukraine is unlicensed. Yet, the situation has improved, since in 2013 this number was 83%. Such high level of pirated software is a huge threat to the personal computers and other devices since they are becoming more vulnerable to cyber attacks than those with legal software (organizations using malware face such attacks every seven minutes). China and Russia are ranked amidst those with the highest warez level as well.

The problem of piracy is spread across the globe. As to the main products being pirated are music, movies, books, software, etc. There numerous website offering the hacked software with keys to it, therefore, nobody can control the exact number of downloads and installs to the hardware worldwide. Today, with the growing popularity of cloud services, the issues of cyber security is even more topical than ever.

As to the different researchers, the global leaders of using unlicensed software are not the developing countries but those with the largest number of population, therefore China occupies the first place in terms of pirated tech use. It is followed by Russia and the USA as the main “leaders” in Eastern Europe and Latin America respectively. 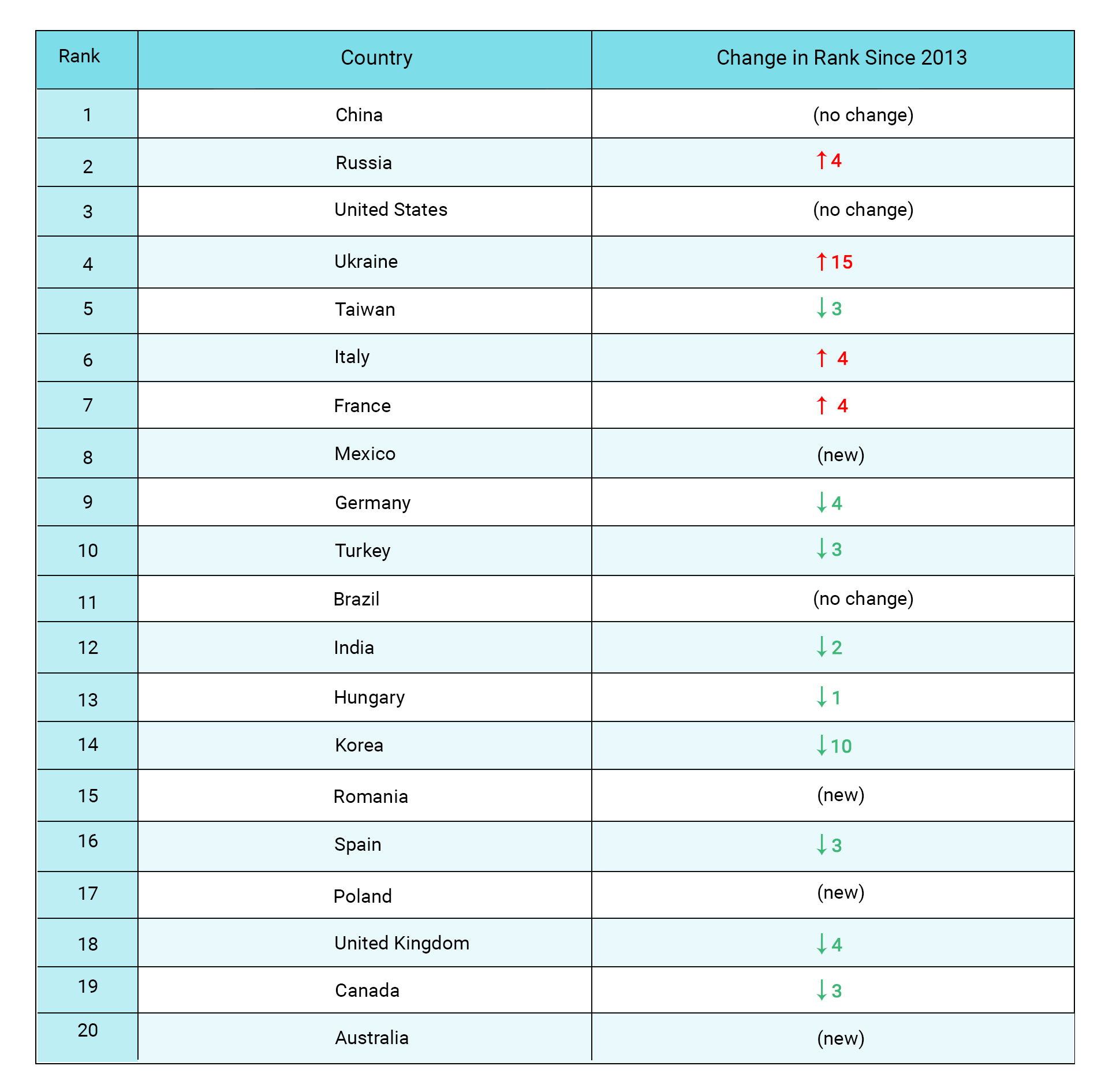 *The rating created on the grounds of the research by V.i Labs report

The commercial value of the illegal software used in Ukraine has reached almost $600 mln. To improve the situation, Ukrainian government introduced the Strategy for Sustainable Development “Ukraine 2020”, where one of the key points to be solved is devoted to IP rights protection and ways of resolving the problem of pirated software and other data like movies, music, etc. This program envisages revelation and closure of both real and online distributors of pirated content as a part of Ukraine’s obligations under the EU Association Agreement. One of the main efforts done in order to fight the distribution of malware within organizations were the raids on offices, where a possible violation of IP rights was noticed. Police along with the Security Service of Ukraine found and arrested lots of computers and servers using the illegal and unlicensed software. U.S. Chamber International suggests that one of a possible ways out is applying more strict legal responsibility and fines for possessing illegal software and media . However, there is also a strong necessity for establishing tighter cooperation with the companies who own the rights for the products. From this perspective, the Ukrainian government has done barely anything.

The Civil Procedure Code of Ukraine and the Commercial Procedure Code of Ukraine there is such a procedure as the provision of the claim before filing a claim. Obviously, if you just file a lawsuit on the use of unlicensed software, before the start of the trial after receiving a copy of the claim, the defendant will most likely hide computers or retroactively acquire legitimate software, etc. Therefore, before the filing to the court, the right holder can apply for the arrest of a certain computer company possession to record the fact of unlicensed software use.

Despite high ranking in the lists of world’s IT piracy, Ukrainian software services providers are severely rejecting the notion of stealing codes or ideas from their competitors. The cultural issues, legislative base, and what is the most important - reputation matters more than the result. Therefore, if an employee decides to reveal information about the client’s know-how or ideas, he will be immediately sued to the court. Of course, many companies in Ukraine may use one licensed software installed on several computers, therefore, the code being developed on an unlicensed software is the worst thing that may happen to you in Ukraine. Download music or video content for free is way more spread, however, in terms of development the regulations are very strict. You cannot be sure when you voice your plan or idea that it won’t be implemented elsewhere by your partner or colleague within a month or so. The state organizations and institutions keep an eye on the industry, especially in terms of sticking to the rule of both national and international laws.

The main reasons why Ukrainians behave the way they do are as follows:

If you are still hesitating - don’t. Unlike South East Asia, Ukrainians respect other’s property including intellectual one and aren’t eager to steal ideas or products. Ukrainian companies do take care of their name, therefore accusations on IP right violation will bring no use for a business or a specialist. Ukrainian IT outsourcing industry is not a subject to software theft since such aspects as culture and reputation are taken care a lot here. Hiring teams from Ukraine will assure you’ll receive everything you have ordered and paid for and that your idea or a product will not be copied and will not appear on the market under another name in few months.

One Response to “Software Piracy: Why You Shouldn’t Get Scared Of Outsourcing To Ukraine”