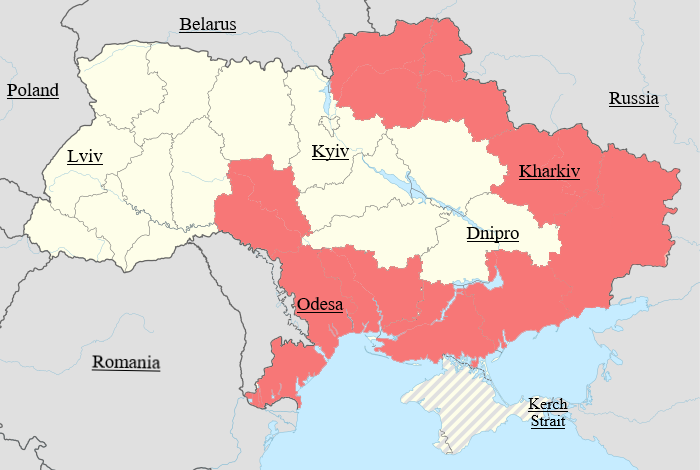 The dramatic Sunday events at the Sea of Azov, when Russia attacked three Ukrainian naval vessels and captured 23 crew members, raised much concern among the Ukrainian society and the world’s community alike. No wonder that Ukrainian IT outsourcing companies have been flooded with a single question from their international partners and clients,

Does recent escalation of Russian aggression towards Ukraine and consecutive decision to impose martial law have any effect on IT outsourcing industry in Ukraine?

Let us begin with a short reassuring answer,

These few insights will help you understand why:

1. Although the act of Russian aggression happened unexpectedly, its probability has been discussed for a long time now.

Many of our clients and partners logically assume that since martial law has been imposed, which did not happen earlier, the situation in Ukraine has underwent a drastic change. This assumption is not true, as Russia has been leading a hybrid war in Ukraine since 2014 and consistently escalated the tensions on the Sea of Azov ever since the annexation of Crimea. For example, since May 2018, Ukrainian vessels passing the Kerch Strait, which, under the 2003 agreement is to be shared by Ukraine and Russia, have been subjects to inspections by the Russian side and lengthy delays.

The major incentives to impose martial law now are (1) the fact that, for the first time, Russia openly attacked the Ukrainian vessels and seamen not hiding behind the image of dissatisfied citizens or separatists, and (2) prior to the act of aggression, Russia had already dramatically increased the number of armed vessels in the Sea of Azov. The third, implied reason, is the wish to postpone the date of future presidential elections in Ukraine.

This way, martial law in Ukraine is a preventative measure and a political means to attract the attention of the world to the aggression of Russia towards Ukraine, which has lasted since 2014, which nevertheless has never prevented the IT industry in Ukraine from flourishing.

What is more, the imposition of martial law does not increase, but, on the contrary, decreases, the probability of full-scale conflict on the territory of Ukraine.

2. Martial law is imposed in just a part of Ukraine, with no mobilization being planned.

Martial law is imposed for just a 30-day period and in only 10 out of 25 regions of Ukraine: those bordering the Russian territory, the Black Sea and the Sea of Azov, and Moldova Trans-Dniester region, which is another place of stationing of Russian troops near Ukraine. These borders are hundreds of miles away from cities hosting largest Ukrainian IT clusters such as Lviv, Kyiv, or Dnipro.

What is more, the President, Petro Poroshenko, assured the nation that no mobilization will be initiated. Thus, there is no reason to anticipate that IT talents might leave the working force any time soon.

3. There are firm assurances that martial law will not affect the bank system and will not limit any basic freedoms

What is important, the version of martial law imposed in Ukraine does not limit any basic freedoms. It does not presuppose any changes to telecommunication channels, so no communication issues with offshore teams are to be anticipated. The National Bank of Ukraine has officially stated that the banking system will continue operating as usual too.

This way, the only change the recent Russian aggression makes for international customers of IT outsourcing companies, is that it calls for words of support and respect to the nation that remains a dedicated and trusted partner even while being compelled to stand up for its state.