Our current post is devoted to the analysis of another popular IT outsourcing destination from CEE region – Belarus. As usual, we compare it with the Ukrainian IT market, provide pros and cons of the two sectors as well as the main trends in their tech spheres.

Belarus has a mid-size IT market which is more USA- and Europe-oriented, less Russia, though. With over 30K engineers, the local market has been included into the TOP-30 IT outsourcing destinations in the world. What makes Belarus extremely attractive for establishing business, it’s a solid governmental support – Belarusian IT companies can get complete tax exemption in case they join the Hi-Tech Park (this is the tech park occupying 124 square acres and is constituting of offices, residential building, educational premises as well as development and construction centers). Such strong support from the President, Alyaksandr Lukashenka has brought huge results – the Belarusian IT market has been showing constant annual growth in both number of IT engineers and generated income to the country, whilst the economy of the country has been rather weak lately. Today, Belarusian tech companies generate 1.5% of Belarus’ GDP. There are over 970 IT enterprises (24 out of these belong to the state) located mainly in Minsk. Amidst these, there are such giants like EPAM Systems, Intetics, Ericpol Telecom, etc. As to the main destinations, Minsk, Vitebsk, and Homel are the leaders. As to the preferences, Belarusian IT market is developing in the following main directions – software development, consulting and support as well as data processing. At least half of Belarus companies are involved into applications development while a quarter of these provides system software development services.

Minsk, being the center of Belarus IT industry, also offers few of the country's largest educational institutions. Still, there are many educational institutions in other regions of the country allowing obtaining an education in the sphere of software development as well. However, the problem is like elsewhere in CEE countries: to get enough experience or proper skills one should better apply for specific training provided by tech schools or companies themselves.

The Belarusian IT industry is annually fueled with approximately 3,000 new engineers, and this number is supported by the fact that all large and popular universities of the country offer high-quality tech education:

Average salaries for IT specialists in Belarus are very similar to those in Ukraine, however, if there is a huge need in a certain specialist, a company is ready to pay way more only to hunt the person and recruit it to their company. In Ukraine, this thing is less popular since the talent pool is larger here. As to the average salaries, companies offer $600-1200 to a Junior developer; $1200-2500 to Mid developer; and $3000+ to Senior developer. Talking about Project Managers, their salaries vary from $1000 to $5000. There are many companies that invite foreign specialists to work for Belarusian companies.

Large players of Belarus IT market offer benefits which don’t differ much from those Ukraine’s does – medical insurance, gym, various training and English language classes. However, some companies compensate their staff the cost for tickets to different sports events. Ukrainian companies don’t provide their specialists with such, however, some arrange different team building events like open-air activities, playing a different sport, etc. Besides that, the latest amendments to the Belarusian legislation simplified the procedures for foreign specialists within passing customs and visas arrangements.

Tax system of Belarus has the certain set of regulations according to which taxes are paid. They are as follows: Personal Income Tax – 12%; personal Social Tax – 1%; employer’s Social tax – 34%. This is the regular taxation; however, there are numerous exemptions. Yet private entrepreneurship model is getting popular in Belarus as well, therefore, Personal Income Taxes vary between 3% to 5%. The Belarusian government has shown huge interest in not only establishing local IT sphere but also attract new foreign clients to invest, to cooperate and open their offices. IT sector has been placed into favorable conditions: local High Technology Park aka HTP is a place, an organization the members, or residents (that’s how they call themselves) of which may have tax simplifications upon certain circumstances:

In order to join HTP, a company should correspond to certain requirements – provide software development, data protection, IT consulting or/and data processing services; conduct scientific researches. As to the payment for becoming a member, a resident company should pay 1% of their gross income every three months. However, the President of Belarus is currently a bit disappointed, since, in an interview, he voiced that despite low taxes and friendly attitudes toward the IT sector, many companies are searching ways to avoid paying taxes completely. Many companies simply reduced the sums of money and numbers of transactions, therefore, it witnesses of returning to shadowed salaries. The anger from officials arises owing to the fact, that some companies even move businesses from the country.

Belarus laws envisage no longer than 3 months of the trial period, however, on average the term lasts up to 1 month, which is claimed to be more than enough to evaluate the specialist's skills. Anyway, it is upon the contracting parties, and local laws do not envisage any term for that.

According to the local legislation, there are no restrictions towards the contracts period (they may be drawn up for non-set up term, fixed term (no longer than 5 years or upon the completion of the tasks), within the seasonal work period, temporary while an employee is absent but is not dismissed).

Termination of contracts is possible upon the following conditions:

One type of forced dismissal allowed by the law is the one due to the redundancy of staff. However, in such case, unless another has not been envisaged by the labor agreements or contracts, an employer is to pay severance payment for equal to 3-month salary. Some companies may also impose additional duties onto an employee who decided to leave, namely, s/he may have to conduct training for a new specialist and deal with the procedure of reassignment of the current tasks.

Cost of living in Belarus is very high if compared to the average salary which is often lower than $500. For instance, an average family of four in Belarus needs up to $1,500 and $420 will be quite enough for one adult person (excluding rent for the apartment). Monthly public transport pass costs is $15,81, however, if you consider renting a car, average price for fuel approximately amounts to $0,61/litr. Renting an apartment will cost you from $230 to $640 depending, of course, on location and number of bedrooms. As to the food, average monthly product expenses will reach over $65-70, yet, eating out prices vary from $5 to $32. For instance, a bottle of water prices start from $0,41 and Coke – $0,60

Office rent in Minsk differs depending on, of course, location and total area of the premises. Average office rent in Minsk varies between $12 and $28. The area or rent are available owing to the governmental support of foreign companies coming to Belarus. The President’s initiatives offer a vast number of various types of building for leases like warehouses, manufacturing facilities and retail premises. There is one thing very important for foreign businesses to remember: if a company considers buying premises, it pays only for building, not the land it stands on. The land is only for rent (maximum rent agreement for the land may be up to 99 years). The land plot may be owned only by the citizens of Belarus or Belarusian non-state legal persons, as well as by the foreigners who inherited the land from the citizens of Belarus.

The current political situation in Belarus is rather twofold: on the one hand, the President of Belarus has established some kind of dictatorship which is met by strongly opposing political parties and local people, and, on the other hand, many local people like their President for strong putting a strong impact on the development of the agricultural sector and IT industry of the country. Another thing that scares investors away from Belarus, is the country’s tight relations with Russia, which is now quite alien to many world countries, due to Vladimir Putin’s tough political behavior in Ukraine and in the Middle East. 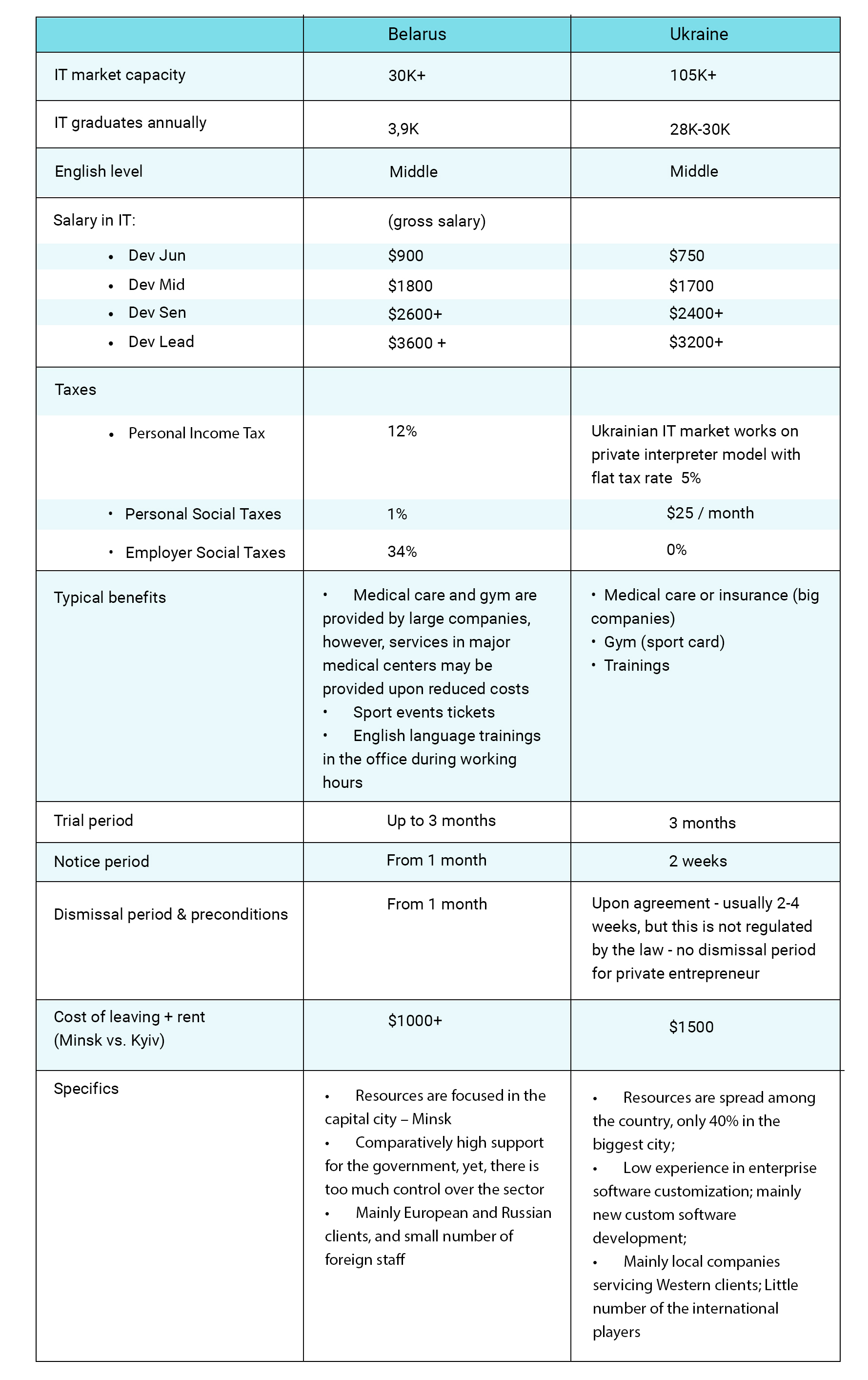