Today’s article is devoted to the overview of Bulgarian IT market and its comparison with the Ukrainian one. In the previous articles we have already provided an insight into the IT sectors of Romania and Poland.

Bulgarian IT market capacity is comparatively low – it comprises of 24K of specialists employed in 400 companies. Sofia, the capital city employs 8K software developers. Out of these, 2500 specialists are employed by the software services companies. The IT outsourcing sector of the country is financially attractive as it generates $250M income to the state budget. Bulgaria also benefits from the presence of the global IT giant – HP. The company employs over 6K staff. Information technologies occupy 20% of Bulgarian outsourcing industry. The significant growth has been shown since 2012 (15K specialists in 2012) – the outsourcing industry has been fuelled with over 7K specialists. Different researchers claim the Bulgarian IT market will reach over 30K employees by the end of 2017.

Bulgarian system of education is known for vast number of educational institutions. IT includes over 200 of high-schools providing tech education including software engineering, information technologies, and other IT related subjects. Also, there are more than 15 higher education establishments offering ICT classes. Moreover, Bulgarian students study both Bulgarian and English languages as compulsory, and over 70% of students also study the third language of their own choice. Generally, Bulgarian universities graduate 3.5K specialists annually. Among the most famous institutions providing IT education are:

Salaries for Bulgarian IT specialists are viewed as lower than in many other IT outsourcing destinations. Excluding the IT industry specialists, average salary in Bulgaria barely reaches $500.

Amidst the main technologies used by the Bulgarian IT specialists, Pythonistas take the leading positions - salaries for Seniors are the highest amidst all developers and start from $2000, whilst Senior Java developer’s salary from $1400.

What makes Bulgaria attractive for foreign clients is one of the lowest tax rates in Europe: Personal Income Tax (10%) + Social Taxes equal to 22.9%, whilst Employers Social Tax amount to 17.8%-18.5% + 10% Income tax.

As to the benefits, Bulgaria is known for providing its specialists with food cards, therefore they can eat for free depending on a place the company cooperates with. Not so many countries, do that, don’t you think? Besides that, most companies offer health insurance and, in some cases, you can get vehicle insurance as well. Perhaps, one of the largest advantages is the EU membership allowing to be officially employed by other European Union countries since 2013.

According to the Bulgarian legislation, a person can be hired at any time upon the agreement of the parties (usually trial period lasts from 1 to 3 months); however, with dismissal, the regulation is way stricter. Article 326 of the Labor Code determines 30-day notice period before dismissing a person from the occupied position. Yet, the notice period, upon the preliminary agreement, may also take up to 3 months but no longer than that. With fixed-term contracts situation differs, since, here 3 months is a minimum notice period, moreover, an employee sometimes is required to work until the contract expires.

Dismissal conditions are also predetermined by the legislation; therefore, both, an employer and employee may terminate the contract. The main difference is that if a contract is discharged by the employer, there written notice should be sent with an explanation. The very explanation may include the company’s partial or complete closure, termination of activity for which an employee was hired. Under such circumstances, an employee is offered a compensation which should equal to at least 4 gross monthly salaries (upon the agreement between the parties). If an employee has not replied to the offer within 7 days, the offer is considered as not accepted. Moreover, an employer is to pay off the compensation within 1 months from the date when the contract was terminated. Only in the aforementioned cases the Labor Code is not violated.

Cost of living in Bulgaria is very high if compared to the average salary which is often lower than $900. Transportation pass costs up to $30 using a public transport, but if you consider renting a car, average price for fuel approximately amounts to $1,1. Renting an apartment will cost you from $220 to $550 depending, of course, on location and number of bedrooms.

Bulgarian IT market is viewed as one of the most dynamic worldwide. Owing to the presence of R&D and BPO centers of large IT companies, Bulgaria shows great potential for reaching out numerous foreign clients. The local IT sector has a huge number (and it’s quickly developing) of local companies in the highest value-added market segments.

As to the main weaknesses and possible threats is, first of all, high dependence on the EU, since, all the patented products and services mainly belong to the companies, usually foreign ones, therefore, all the credentials go to the company. Many companies address Bulgarian IT specialists also due to the comparatively low services costs, however, this doesn’t mean the quality is low. 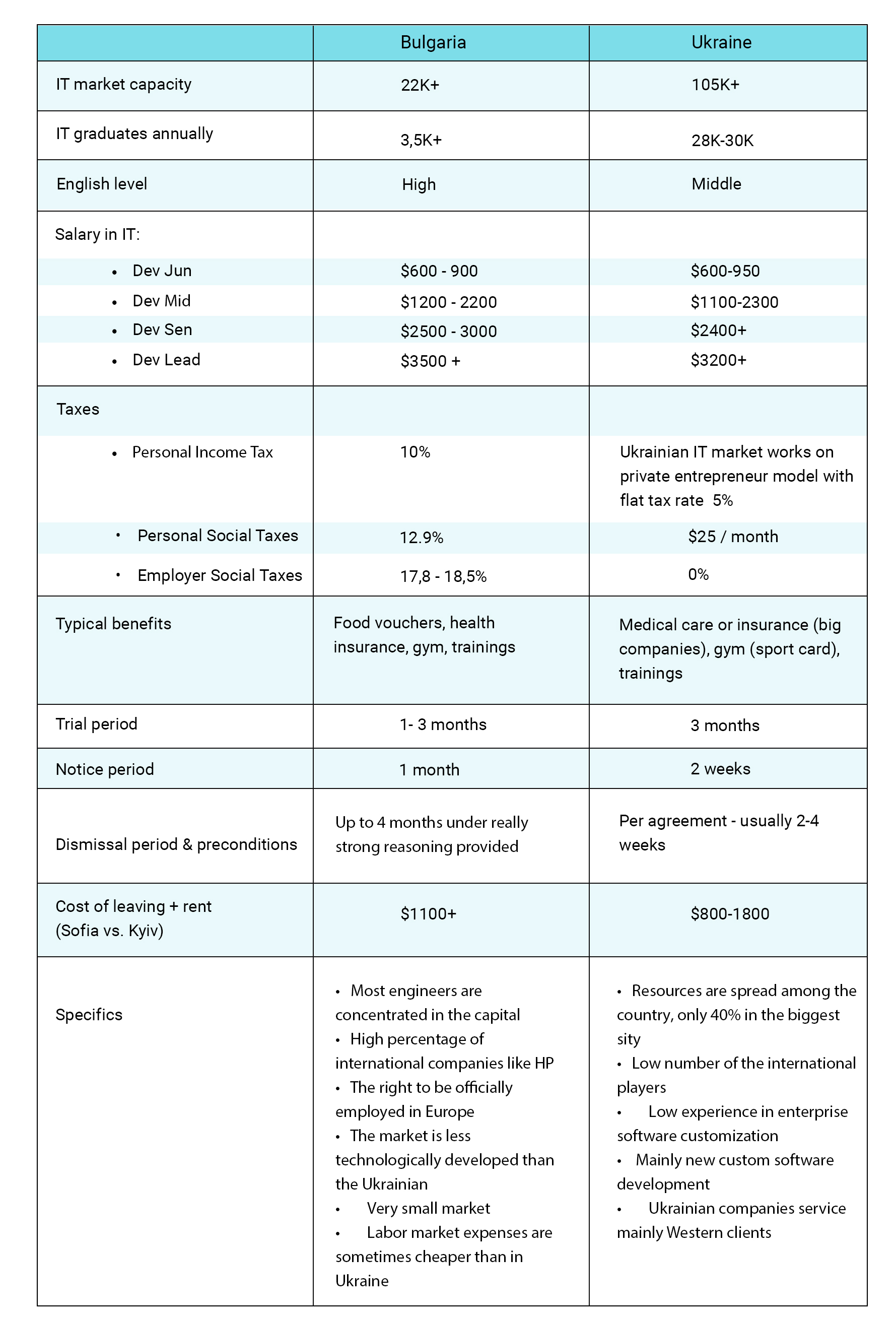 Comparing Bulgarian and Ukrainian IT markets, it’s obvious Bulgarian is smaller, therefore has less working technologies applied, however, BPO centers are widespread notion in the local IT arena. As a matter of fact, this issues exists owing to the vast number of international players like HP, EPAM, Luxoft, Ciklum. From that perspective, Ukraine loses in the number of large companies, however, has a lot of smaller ones providing a huge scale of software development and project management services. For instance, BPO centers are only appearing in Ukraine, whilst there lots of them in Bulgaria. The range of salaries also differs between the two markets - Junior developers salaries are rather equal, but starting from Middle developers Ukrainians’ get a little bit but higher sums.

8 Responses to “IT Outsourcing Markets Review: Bulgaria vs. Ukraine”