Slovakia is another comparatively small European market. However, fears are rising as the local market is fueled with cheap crediting on real estate which scares the economists. Car manufacturing industry remains the main industry; however, the existing number of specialists doesn’t meet the demand of the market so far. Today, we’d like to draw your attention to another growing market in Slovakia – IT. The share of specialists involved in IT sector exceeds 4% of all the working population of the country. It is also claimed amidst the fastest-growing economies in Europe.

Slovak IT market has shown dynamic growth since it’s joined the EU in 2004. The country is not only developing software but also became a strong player in the international arena of computer technologies. The current contribution of the ICT (Information and communication technology) sector to the Slovak GDP reaches 4%. One of the main facts that attract foreign companies to cooperate with Slovak IT sector is that 92% of its specialists are fluent English speakers, 46% - German, 13% - Russian, and 5% - French. As to the largest international players, there are regional offices of Siemens, IBM International Service Centre, ESET, Accenture, T-Systems, Innovatrics, Sygic, etc. The Slovak specialists claim that the local ICT industry income taxes paid exceed the ex-leading industry – automotive – by several times. The main IT cities of Slovakia are Košice, Žilina, and Bratislava. The total headcount of Slovak IT specialists is over 45 thousand. And year by year, this number is growing since there are over 3 thousand graduates from the local educational institutions.

There are also few IT clusters in Slovakia. Košice IT Valley is the largest in Slovakia uniting 30 companies and legal entities into one mechanism. The cluster has already created over 6K jobs. The cluster members also plan to create the center of IT excellence and attract more young people to join the national IT community. The second IT cluster – Žilina IT Cluster – unites in total 12 companies, universities, and governmental institutions in the northern part of Slovakia.

Students of the Slovak educational institutions study at least one foreign language at primary school and continue improving it further on. Generally, over 80% of the Slovaks speak at least one foreign language beside their mother tongue. As to the IT, there are several universities offering students programs for learning programming and its sub-fields.

The main institutions of Slovakia providing IT education:

Although the salaries of Slovak IT engineers are way higher than the average salary in Slovakia and higher that in Ukraine, they are still smaller than those their Western European colleagues get. The distribution of average salary of the Slovak engineers depending on the position and experience are as follows:

The regular benefits for Slovak engineers include medical care services at lower prices, free legal advice for companies’ employees, and financial rewards for the most successful and productive engineers beside the regular salary. Some companies also provide their staff with discounts to various sport events. Employees are to participate in specialized forums and events with no calculations off their salaries.

The taxes in Slovakia are high if compared to Ukraine. Personal Income Tax is 19% + Social Tax of 13.4% for employees, and 35.2% for employers. For instance, in Ukraine these numbers are: Personal Income Tax amount to 5% for those employed as private entrepreneurs, and 18% for those employed upon Labor Agreements, whereas Social Tax for employees is not being paid and the same for employers is none for private entrepreneurship, and 22% for staff hired upon Labour Agreements.

The trial period in the Slovak companies is not envisaged by the legislation, therefore, it depends on the internal regulations of the company. Yet, it is stated that the trial period should last no longer than 3 months and up to 6 months for some managerial positions in particular.

Notice period depends mainly on the time span an employee has worked for a company. Therefore, this period is as follows:

Hence, in order to hire a skilled engineer you may have to wait for 3 months until he starts working for you. This is significant time comparing to 2 weeks notice period in Ukraine.

The Slovak legislation envisages the following types of dismissal , however, it does not forces neither employer nor employee to stating the reason for dismissal or leaving:

Cost of living in Slovakia is rather high if compared to Ukraine. For instance, an average family of four in the Slovakia needs over $2,000 and $650 will be quite enough for one adult person, excluding the apartment rent which in Bratislava, for instance, varies between $480 for 1 bedroom flat outside the city center and $600 for the same flat in the city center, in Košice these prices are $380 and $480, respectively. Monthly public transport pass costs is $30.55, however, if you consider renting a car, the average price for fuel will approximately amount to $1.47/liter – at least $0.4 higher than in Ukraine. As to the food, average monthly product expenses will reach over $200, yet, eating out prices vary from $5.87 to $23 (for the two-people meal) and more. Utilities payments start from $120 and depend on the area of the apartment. 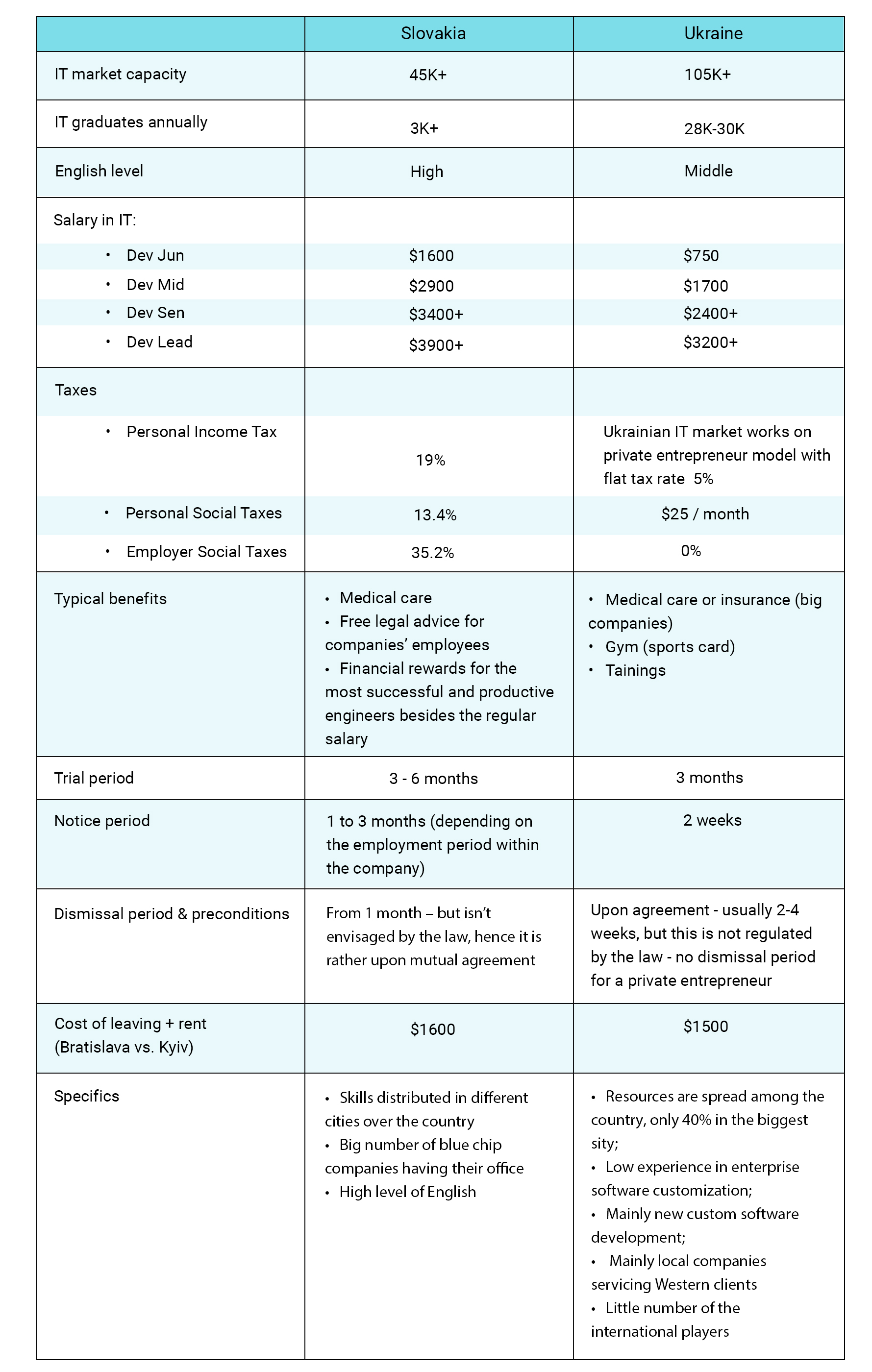