We continue our series of articles devoted to the most popular IT outsourcing destinations of central and eastern Europe. Today’s article discusses the IT market of Estonia, which has been claimed to be one of the most desired for tech specialists and entrepreneurs so far.

Estonia is one of the smallest European countries with the population of less than 1,3 million people. However, it has a comparatively large number of IT specialists – almost 23K as of the mid-2017. The country’s IT market seems extremely attractive for both potential customers and engineers. One of the main things that make Estonia progressive is the governmental initiatives to turn everything electronic – from tax to the judicial system, from medical care to e-residency. Basically what the government did was the extended use of its developing IT industry in favor of the country. These initiatives not only stimulated the IT sector growth but also caused numerous global tech players like Nokia, Sony Ericsson, as well as foreign banks to open their regional HQs there. Another attractive issue is that in Estonia, if a company does not withdraw its income but reinvest it into business development, then it is exempt from paying the tax from the money that was reinvested. Another impetus was coming from the government in terms of providing various benefits for businesses in general and IT companies namely. Basically, there are currently three main types of tech companies: purely Estonian; Estonian companies that eventually turned into international – mainly these are local startups that attracted international funds; purely international. Moreover, these are international companies that hire foreign specialists mostly, and Ukrainian programmers are in demand there as well.

In general, there are less than 30 higher educational institutions in Estonia, however, not so many offer tech education. Yet, such a number of local universities and institutions is more than enough since the population is not big. Moreover, many classes are conducted in English, therefore, many foreign students find Estonia attractive for their studying as well as many prefer staying there and continue living and working there.

The main institutions of Estonia offering IT education both state and private are as follows:

The main benefits of working in Estonian IT include full support in case a specialist moved to the country from abroad (searching for a flat/house, etc.):

Foreigners who come to Estonia are extremely protected by labor legislation. Contracts with foreigners are checked by the police. Therefore, an employer who employs a foreign specialist will not risk and conclude suspicious contracts. There is also a Labor Inspection in Estonia that is focused mainly to protect employees, hence, it is not advantageous for an employer to risk. In case, there is some violation of the labor legislation, the Inspection supports an employee by default.

Since Estonia now is viewed as one of the most progressive countries in terms of automation daily routines, it makes life easier there as well. People simply go online and do everything there. There is no longer any need to go to different institutions, stand in long lines and wait. Even doctor’s prescription for medicine can be obtained online. The information is simply uploaded to a person’s ID card, and there it is. Then an individual goes to the pharmacists and gets the necessary medicine.

Taxes in Estonia are not as high as in other European countries. For instance, Personal Income Tax equals to 20% + Social Tax of 1,6% for employees, and Employer Tax is 33%. In addition, there is 2% contribution to the Pension Fund. For instance, in Ukraine these numbers are as follows: Personal Income Tax amounts to 5% for those employed as private entrepreneurs, and 18% for those employed upon Labor Agreements, whereas Social Tax for employees is not being paid and the same for employers is none for private entrepreneurship employees, and 22% for staff hired upon Labor Agreements.

Basically, young companies, that invest all their profits into the growth of the company, pay 0% taxes. Such initiative aims at growing private businesses as well as attracts more companies to settle here. In terms of Ease of Doing Business Index, the country is always among the leaders: last year, for instance, Estonia was ranked 16th out of 189 countries worldwide according to this Index.

Hiring period in Estonia may last from two weeks up to 3 months, however, companies review the trial period in case a specialist’s performance is suitable for the given pp

Notice period depends on seniority of an employee. Hence, the duration of the notice period varies as follows:

Of course, the notice period may be different depending on the personal terms of agreement. The contract may be terminated earlier due to some special circumstances upon mutual agreement of the parties or, in cases of strongly supported necessity for the contract termination.

The Estonian legislation envisages different types of dismissal depending on the type of position and reason for being dismissed:

The Estonian government strongly protects certain categories of employers from dismissal. These are pregnant women or women on maternity leave, those individuals that are on child care or adoptive parent leave, as well as employees’ representatives

Cost of living in Estonia is comparatively low if compared to other European countries. For instance, an average family of four in Estonia needs approximately $2390 and $700 will be quite enough for one adult person, excluding the apartment rent which in Tallinn, for instance, varies between $390 for 1 bedroom flat outside the city center and $530 for the same flat in the city center. Monthly public transport pass cost is $27, however, if you consider renting a car, the average price for fuel will approximately amount to $1,39/liter. As to the food, average monthly product expenses will range from $100-150, yet, eating out prices vary from $9 to $46 (for the two-people meal) and higher.

Office rent in Tallinn differs depending on, of course, location and total area of the premises. Average office rent in the capital of Estonia varies between $7,5/m2 and $12,9/m2 without furniture, and $9,3/m2 to $31/m2 if it’s partially or fully furnished. The area for rent is also available in different coworking office spaces. The prices in such offices start from $9,3/day or $3,5/hour. Different coworking spaces offer different prices depending on how long you stay and what activity you rent the place for. Some of them offer monthly rent as well. 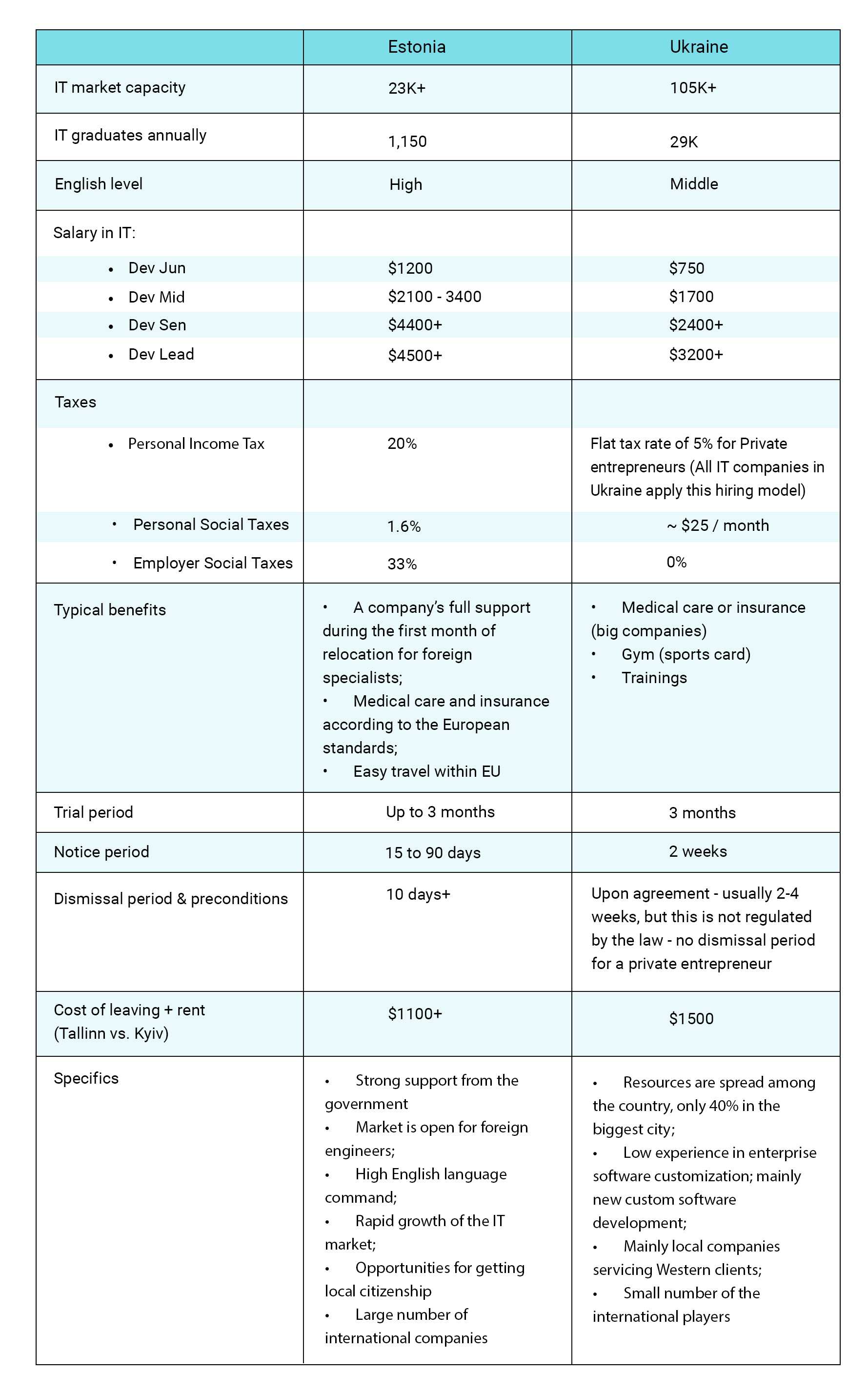 2 Responses to “IT Outsourcing Markets Review: Estonia vs. Ukraine”